North Hill, Highgate N6 4AB
The orginal  building, Walter Segal built his own single storey house in the back garden of his home whilst it was being renovated, despite it being only planned as temporary, it is still there  until 2015.  I have attempted to photograph it but it is in a back garden, so this the best photo I could take.

Sadly now demolished apparently it was in very poor state of repair. It was only meant to be temporary building, however may be replaced with the same footprint and in a Segal style, current owner is a Segal fan and very interested in Segal self-build.
The 20th century society took photos. 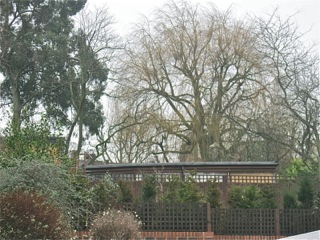 The Modern House:
Great Images of 9 North Hill site and the "NEW" Little House In The Garden !
https://www.themodernhouse.com/past-sales/walter-segals-house/